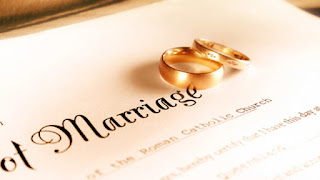 I see marriage as a partnership, a long term commitment or a committed contract between two adults. In the bible, Genesis chapter 2:22-23 says "and the rib which the LORD God had taken from the man the he made into a woman and brought her to the man.

Then the man said, "This at last is bone of my bone and flesh of my flesh; she shall be called Woman, because she was taken out of Man. Colossians chapter 3: 18-19 says 'Wives submit to your husband, as fitting in the Lord. Husbands, love your wives, and do not be harsh with them.

Some people get married because of some reasons which could be pressure from their families, financial problem, spiritual and religious purposes among others. Not everyone you see getting married have the knowledge of what the union is all about. These days a lot of men and even women abuse the union ordained by God. A lot of news about divorces, cheating, domestic violence and even child abuse breaks my heart. Due to the act of irresponsibility and heartless monsters who call themselves men abuse their own daughters. A heinous crime.
In the case of divorces, couples get separated without minding and neglecting the children who are deeply affected. I know of a couple with two beautiful girls, the husband is a security man where he works and his other half a business woman. They fight almost everyday.

How do I know? Their neighbors are the peace makers who try to settle their disagreement because the woman will take their verbal dispute from their home, outside to the street, placing curses, insults on the father of her children and even make mockery of the him because of his job. Telling the man to his face that he should be happy a master degree owner married him.

One day, out of frustration he beats her and what did she do. She called her brothers and they beat her husband black and blue. The injuries laid on his body will make you feel he was involved in a fatal accident. He couldn't see clearly for some days.

After everything the so called wife parked her belongings with her children away from her home to live on their own. I will never support men who hits women because I find it repulsive but that should not give her the reason or right to get her husband beaten and leave him. They could have settled it maturely and amicably. Now the children are separated from their father at a very young age. What a pity!

All in the name of tradition and culture in Nigeria some men marry more than one wife causing calamity, hatred among the wives and even the children. They call it polygamy. I still don't have a clue why some men still involve themselves with it in this modern age.

What about the men who have no shame, cowards who forcefully get married to a girl old enough to be their own granddaughter. Most of these girls have not even started developing breasts or to see their menstrual flow. They pressurize families to release their daughters as their wives. They hand over their female children due to poverty, ignorance and illiteracy.

Some callous men who have no honor get married because of their selfish reasons, malevolent sexual desire. They don't care if these innocent girls are under aged and undeveloped. A time came when various newspapers reported that a girl married in Yemen was admitted in a hospital after four days after her wedding. Sexual intercourse appeared to have ruptured the girl's internal organ, hospital officials said. She had bled to death. She was only thirteen years old.

These wicked men should be eradicated from the surface of the earth. They have no good impact to the younger generation. For them to have such a heart to involve themselves in such a disgraceful act simply means they have no fear of God.

Marriage has been abused. If you can't stay with a man or a woman for the rest of your life please remain single. Marriage is not for everyone!
at February 20, 2015