Murder in room 16. Episode one 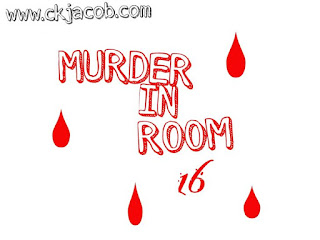 ******
On a tepid Saturday evening, a police officer Rose Bamidele, average in height, chubby and smartly dressed in a fitted black suit arrives at a motel, where a man was seen dead.


She was directed by the manager, a very tall man to room 16. She walked in to survey the crime scene of a lifeless body of a slender man in his late thirties.

A dead soul. He was sprawled face-down in a thick red substance on the white rug. It was blood. Blood, bits of some of his skull were scattered, seen on the rug.

An average size Iron art work with a sharp edge was on the floor with blood all over it. Murder weapon.

Rose moved away from the semi nude body that wore only a yellow shorts and wristwatch on his wrist.

She examined the scene.The room was untidy with the bedsheets by the side of the bed. His luggage was opened with clothes littered inside it.

Unused condom, a pack of cigarette, an empty bottle of vodka was on the floor. A wallet placed on a shelf. The victim's identity card was inside it.

The victim's name was Edward Kelechi. He was a car dealer.

As the officer looked round, she sighted a necklace covered in blood. Hand gloves were given to her by one of the paramedics. She picked it up and wiped away blood from the pendant.

'To my beauty' was crested on it.

Officer Rose thought, "whoever was the killer may be the owner of the necklace. It was meant for a woman.'

She left the room to see a young, light-skinned receptionist who called the police to make the report of the unfortunate Incident. She was shaking and her eyes were red.
Rose said to her, 'You need to put yourself together in order to answer my questions. I need some informations about the man. Understood?'

She managed to nod.

'Were you the first person to see the body?'

She shook her head, shut her eyes and opened them. 'This is the first time for me to see a dead body.' Nkechi burst into tears.

Rose took a deep breath. 'I'm sorry about that but please put yourself at ease. I need an answer from you.'
Nkechi wiped away her falling tears. 'The cleaner was the first person. She went to his room to clean up the place and saw his body. She alerted me and I went there to check for myself.'

'When did the victim lodge in this motel?'

'Yesterday morning and I have the record.'

'Okay.' said Rose. 'Was he a regular customer or was it his first time here?'

'He was one of our regular customers.'

'Is there any particular girl he came with?'

'Not really.' she said pitifully . 'He came alone yesterday but in the evening a girl came to see him and she left this morning.'

'Did you see him through out today?'

'Yes, early in the morning .' Nkechi replied. 'I went out by 10am but when I came back by 2pm he was having lunch with another woman at the restaurant.'

'Did they go to the room after lunch?'

'Yes.' Nkechi responded and paused. Her weary eyes fixed at Rose. 'I saw the woman leave in a hurry when she left but I never thought maybe something was wrong.'

'And you have no record of this particular woman?'

Nkechi scratched her head repeatedly. 'I will be in big trouble if I say it.'

'Say what?' Rose asked with her left eyebrow raised.

'Me and the workers knew she was dating Mr Edward but he doesn't know.'

'What are you talking about?' Who doesn't know.'

Nkechi sniffed her nose and spoke tearfully . "'The manager of this place."

"The woman is the manager's wife."