Fighting over a man. Not worth it! 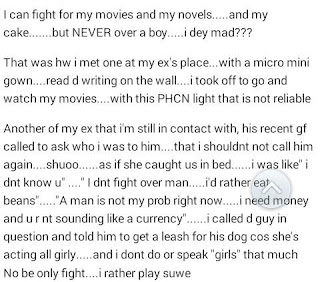 I saw this comment on SDK over a post about two girls fighting over a man. This was my favorite comment that day. Fighting or blaming and raining curses on a fellow woman because of a man is totally ridiculous and meaningless. It makes you insecure and weak. If a man does not want you any longer that does not warrant you to curse out a fellow woman. It’s not worth it because fighting does not bring money to the table. It does not add any value to your life. It does not allow you go for shopping free of charge, rather you will end up with scars, headaches and you will end up spending extra cash taking care of yourself in the hospital/clinic.
When I was in school, I remember I overheard an argument between two females in my school hostel. I thought they were arguing over Money, only for me to be told one of them slept with the other one's boyfriend.

I saw no sense in it at all. Who should the girlfriend blame? Though, the friend was a foe. She betrayed their friendship but it was not worth fighting for. The boyfriend is the enemy for cheating on his girlfriend and sleeping with his girl’s friend.

I rather drink a bottle of Alomo which I dislike because it's very bitter or sleep than fight or argue over a man. I am very lazy for that.

All women are not the same, so ‘some’ ladies should try and ignore when something like this occur. They should work hard, fight the urge to indulge in a mortal combat and neglect the man. You can cry that you have been hurt but behave like a wrestler or throw blows to a woman like yourself is demeaning. Someone better will surely come her way. I believe there are good men out there who will not cheaply downgrade himself to hurt a woman he loves. When a man is truly yours, he will not hurt your feelings.

Don't allow a man make you become violent.  Don't you think the man might be playing you both?

Forgive and let go. Men should be fighting over us (yes! I said it) not vice versa. We are special.