Melissa McCarthy's Showed off her new frame on Friday night.


The Hollywood actress has shed off some weight and it suits her. She hosted a celeb packed event for shoe designer Brian Atwood in Los Angeles on Friday night.

Melissa was reported to have lost around 50 pounds in June but looks to have continued slimming down as she displayed her slimmer figure on the red carpet. 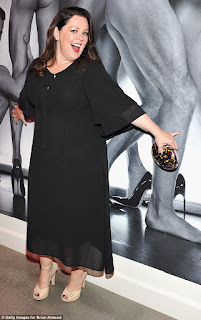 She was dressed in a floaty black dress with nude heels for the Celebration of Pumped party which was also attended by Kris Jenner and her boy toy, Corey Gamble. Do you know Melissa is the third paid actress in the world? Yes she is!