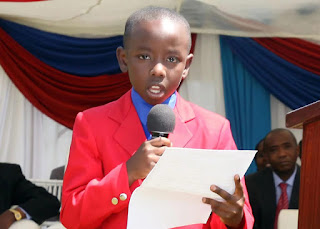 Ngure Matu Ndiritu, 8 years old became Kenya’s youngest author after he launched a children book that he started working on when he was only six years old.
His book was published in 2014, a few month before his 9th birthday. It is titled Out of the box and it is a collection of short stories told from the perspective of a child. The children book sold 6,000 copies. Currently Ngure is working on a 100-page fictional novel also targeting children. He is counting on the fact that as a child, he can tell stories from the perspective of child better than an adult author.

Some of the stories  in Out of The Box are: ‘Waturi and the Kitten’ about a little girl that finds an injured kitten and takes him in, ‘The Brave Elephant’ that becomes friend with a dinosaur and ‘James’ about a poor boy that helps heal a princess.
A quick read through a few of the stories reveals the immense creativity and somewhat rare imagination in Ngure.

Ngure’s stories are virtues like kindness and love. If he is not helping an injured animal, he is helping a friend or a neighbour. In his world, everyone is friend of each other regardless of tribe or colour.
Ngure wants to write 100 books in his life time.
When asked what he wants to become when he grows up, his answer.
“When I grow up I want to be the President of Kenya or a pilot. Writing is just a passion which i will keep following,” he said.
In school, Ngure is the class Senator and aspires to be the school president in three years to come.
He is also taking piano classes once a week to grow more of his artistic talents.
at October 24, 2015