'My life will never be the same': A beautician left with one ear after acid attack speaks 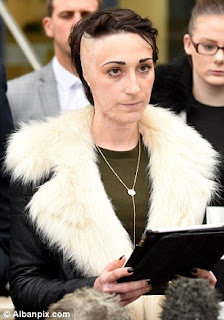 A jealous and controlling ex-boyfriend attacked his beautician ex, Adele with acid leaving her with one ear.
The heartless man has been jailed for life. Adele Bellis, 23, lost an ear, was left partially bald and has permanent scarring following the sulphuric acid attack at a bus stop in her home town of Lowestoft, Suffolk, on August 14 last year.


It was the culmination of a six-month campaign by her former partner of seven years, Anthony Riley, 26, of Lowestoft.
Five months earlier she had been stabbed in the face by one of his friends.
Miss Bellis has now called for new laws and restrictions to prevent the rising number of attacks.
Speaking outside court, Miss Bellis said: 'I believe that anyone who plans or uses acid to attack someone should automatically get a life sentence because for us as survivors it is something we have to live with for the rest of our lives.

'I also feel a life sentence would help act as a deterrent to other potential attackers. Acid seems to have become another weapon for sick, unstable individuals.

'It needs proper restrictions placed on it at the point of sale, like any other potential weapon. At the moment it's too easy for anyone to buy acid on the high street.

A trial at Ipswich Crown Court heard that, fuelled by jealousy, Riley had become determined to control and disfigure Miss Bellis and recruited three men to help.

Riley, who appeared by video link from prison, denied false imprisonment, conspiracy to apply a corrosive liquid and conspiracy to cause grievous bodily harm with intent, but was found guilty of all offences.