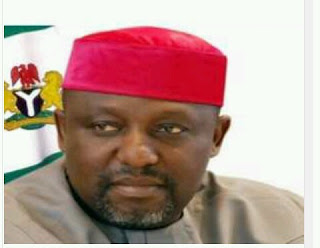 According to sun reports, A chieftain of the party told newsmen in Owerri, the state capital allegedly that the governor had abandoned  his responsibility as governor leaving the business of government in the hands of his son-in-law, who is his chief of staff.
He also alleged that Okorocha  run from one state capital to another to promote his personal business.

The chieftain said: “A situation where the governor abdicates his office and prefers junketing from one state to the other, promoting his personal politi­cal ambition, leaving the running of the state to his son-in-law, who is his chief of staff, is unacceptable to the people of the state.

“Okorocha is running Imo like a sole ad­ministrator of a private business. Five months into his second term, there is no state execu­tive, no advisers and more worrisome is that the House of Assembly has been more on re­cess than on legislative business.”
- October 19, 2015