The facts are unbelievable but True! 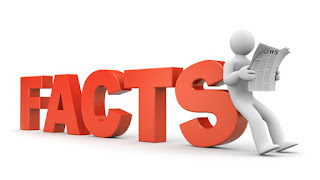 1. The Romans used to clean and whiten their teeth with urine. Apparently it works. Please don't do it, though.

2. Female Kangaroo have three vaginas.
3. Everyone has a unique tongue print, just like fingerprints.

4. In 1597, the man said to have the longest beard the world dies after he tripped over his beard running away from fire.

5. Every time you sneeze your heart stops for a second.

6. The average human will eat 8 spiders while asleep in their lifetime.

7. An ostrich's eye is bigger than its brain.

8. Cockroaches can live 9 days without their heads before they starve to death.

9. It is physically impossible for pigs to look up at the sky.

12. The coconut is the largest seed in the world.

13. If every person in China stood on a chair and jumped off at the same time... It would knock the earth off its axis!

14. All elephants walk on tiptoe, because the back portion of their foot is made up of all fat and no bone.

15. Our eyes are always the same size from birth, but our nose and ears never stop growing.