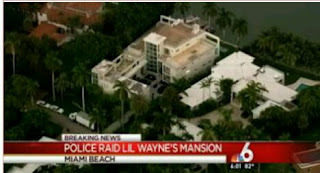 According to reports, Miami-Dade County Sheriff's deputies raided Wayne's Miami Beach mansion on Tuesday.
They had a warrant which allowed them to seize his property to satisfy a $2 million judgment Wayne owes to a private jet company.

There was no one in the house when the raid took place. Wayne has $30 million worth of art in the mansion and cops took some of the pieces.
- November 04, 2015