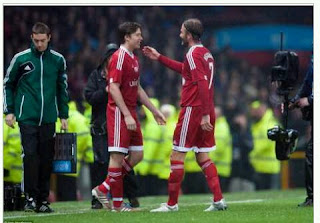 I love football! Today, David Beckham played in front of 75,000 fans at Old Trafford. The football match was between the Great Britain vs Rest of the World 'Match for Children' was Beckham's brainchild to mark his 10th anniversary of being an ambassador for international kids charity UNICEF.

The former Manchester United and England player joined his famous friends to play his seventh match across the world in nine days.

The proud moment came on when it was 15 minutes remaining to end the match, another Beckham with the same number 7 took David Beckham's place. It was 16-year-old son Brooklyn that entered the pitch to play.
at November 14, 2015