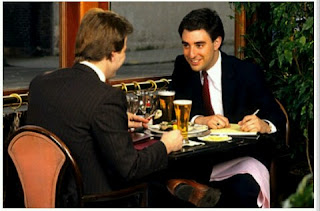 On a Thursday afternoon, Mr. Kunle and his best friend Abraham left their place of work, an oil company to have lunch in a nearby restaurant. Tall, slim and good-looking Kunle and average in height Abraham sat down close to each other. A female slender waitress came forward to ask for their order.

“Give me Jollof rice and turkey with orange juice.” Kunle said with a smile on his lips. It was his favorite food.

“I want Eba and vegetable soup with goat meat,” he said.

“Any drink sir?” she asked him.

“Okay sir,” she said and turned.

Kunle eyes were fixed on the buttocks of the waitress as she walked to the direction of the counter. Abraham tapped his friend on his arm.
“You will never change!”

He laughed and glanced at his friend. “It’s a free world nah…I must admire if I can’t smack that ass.”

“She does not even have ass like your former girlfriend.”

“Ini nah,” he said. “That your former chick yansh is big! I don’t know why you discharged her.”

Kunle hissed. “Na yansh I wan chop? It was used as my pillow whenever she comes to my place. I have to plan for my future and give my children the best.”

“But she was working for an insurance company when the two of you were dating.”

“That is not what I want.” He said and leaned closer to Abraham. “Guess what?”

“Rita has finally agreed to spend the weekend at my place.”

He widened his eyes. “You mean the senator’s daughter?”

“Of course!” he said in an excited tone. “After spending lavishly on three dates, she is going to be my girlfriend and I won’t waste time before giving her an engagement ring.”

“You want to marry a girl you don’t love?” he asked in a surprised tone.

“Money will make me love her.”

Abraham said nothing as he saw the waitress coming towards them with their lunch. She dropped them on the table and left. They didn’t waste time to start eating.

“You should not have broken up with Ini,” Abraham said after he ate four lumps of Eba. “That girl really loved you. After five abortions for you, haba!”

"When I was banging her, why didn't she tell me to use condom? Ini enjoyed my rod and she paid dearly for it."

"You should have told her to keep at least one of the pregnancies."

Kunle put down his spoon on the plate of rice and peered into his friend's eyes. "I will never have a child outside wedlock. Do you want to give me hypertension?"

He raised his left eyebrow. "What do you mean by that?"

"Babymama drama!!" he uttered. "I can't deal with that." He went back to eat.

"There can never be babymama drama when there is understanding between the two partners."

He stopped to eat. "There can never be understanding. Have you forgotten the drama between Davido and his babymama?"

"Forget that one." Abraham said. He took a bite from the goat meat. "WizKid has a babymama and I have never heard any drama that happened between them."

"There will always be drama my guy! I heard a chick in America has given birth to a son for him. I will never allow any woman that is not my wife keep an unwanted pregnancy. I can't pay for unnecessary bills. When my last girlfriend Georgina threatened to keep the last pregnancy she had, I begged, paid her good money to get rid of it."

"Trust your guy! I took her personally to a doctor for an abortion."

"Well, I still think Ini was the right one for you. When last did you see her?"

"I don't really know," Kunle replied. "Maybe five or six months ago. She used to call me but I don't pick her calls.

"A month ago. I managed to date that one for three months. She had body odor."

He shook his head. "Playing with women emotions is not good. Remember you have a sister."

"Don't you cheat on your fiancée?"

"But it's once in a while and I always use a condom." Abraham gave him an answer.

"Leave trash for lawman! Let's eat and forget about these women."

After going back to finish their food, they paid their bills, stood up and strolled outside. Kunle quaking eyes saw a woman he thought was familiar but he looked away because he concluded she can never be the one. The chubby lady had a protruding stomach. She was heavily pregnant and was walking towards their direction.

"Is that not Ini?" Abraham asked.

He looked at the woman again. She was very close to them. "It's Ini oo. When did she get married?"

As Ini got close to where they were, she gripped his shirt. "I have caught you today! You have been ignoring my calls. Shameless man!

He was shocked by her attitude."What's the meaning of this nonsense?!"

Men, women stared at them.

She looked at Abraham, eyed him and glared at Kunle. "You have to follow me to the hospital today!"

She removed her hand from his shirt and put them on her waist. "You are responsible for my pregnancy," she replied in a serious tone. "and I am carrying twins!"

Abraham was stunned. He could move his lips to talk but open them.

"Are you sure about this?" his friend asked her.

"I was three months pregnant when he broke up with me. I didn't even know until I was four months gone. I had to keep it because I was scared to have another abortion."

"Why didn't you tell me?" Kunle finally moved his lips to ask her a question.

"I wanted to inform you but you don't pick my calls. Be prepared to pay the bills and be a part of our children lives."

Abraham could no longer hold it, he erupted into laughter.

Kunle thought of the senator's daughter, politics money, he fell on his knees and raised his hands up. "I am begging you in the name of God, I am not mentally and psychological okay to raise a child, not to talk of two. I am ready to pay any amount to get rid of the babiesl."

"What!" she exclaimed. Stunned by his words.

Abraham stopped to laugh and frowned at Kunle. "Are you blind?" he asked. "Can't you see her tommy or can't you calculate that she is nine months pregnant. My guy be ready to be Father!" He began to laugh again.

Kunle put his hands on his head. "I am finished!!!"