A heartwarming story true story. In Pennsylvania, a bride Jeni Stepien lost her father in 2006. They donated his organs. Ten years later, when it was time to get married, she did some research and found the recipient of her father's heart. She asked him to walk her down the aisle. It was emotional. 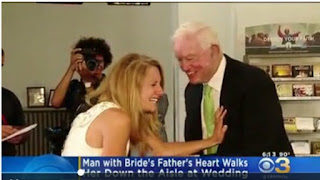 It's beautiful to think her father's heart was there. He wasn't. Not physically. But the part of him that loved her most? That was. Science is amazing.

When I got married, my mother was absent. She died nine years before I walked down the aisle. Many people told me she was there in spirit, but it didn't feel that way for me. Though it was one of the happiest days of my life, it was also bittersweet. I missed my mom. Anyone who has had such an important absence on such a big day can relate. Not only does this story reaffirm the importance of organ donation — her father gave this man his life back. Could there be a greater gift? But it also reaffirms something else: People are good.
This recipient took the time to walk the daughter of his heart donor down the aisle. To show her that her father's heart still beat for her. He didn't have to. He chose to. And maybe, hopefully, that gesture gave Stepien the strength she needed on such a bittersweet day.