Short story: All that glitters..… 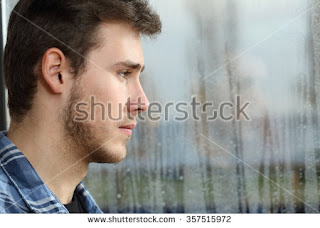 “You are a useless boy Etinosa!” His mother’s heavy voice rang inside his ears, as he looked at her straight-faced in the kitchen. She was a very fat woman with a pretty face.

He had left the house very early in the morning to play football with his friends in a small field three streets away from his home. He was nineteen years old and awaited his result to gain admission into the University. It was the second time he had written the exam. When he returned home at 9:30am, he went straight to meet his mother for breakfast.

“But I went to…” He tried to explain but she cut him off.

“Shut up your dirty mouth before I do that with the back of my hand!” She spat out, her eyes raging in anger. “Who is your slave in this house?”

“No one ma.” Etinosa said and bowed down his head. He felt bad. It was not intentional to get his mother in such mood; he loved seeing her smile and watching her in a furious attitude made him sad.

Mrs. Vasco dropped the knife on the chopping board she was holding to slice some vegetables. She jagged a finger at her son. “You are the only one giving me problems in this house. How can you leave as early as six ‘O’clock to play football with children that have no future? Are you a footballer? Can’t you read your books at that time so that you can pass?”

He raised his head and looked straight into her eyes. She noticed his facial appearance changed into a frown. “Most of my friends are already in the university. They have bright future and I don’t play with agberos.”

She set her hands on her waist. “That is your business! Try to change. Your younger sister is doing well at school. You have to come out in flying colors. If not, don’t be surprise when your sister enters into the institution before you. Be serious and act like Osaro, be like him. He is better because he behaves well! He does not give his mother headache like you.”

He did not act surprise. He expected her to compare him with the son of her best friend, gossip partner and neighbor.  Osaro was already a 300 level student in the university and twenty years old.

“Have you heard me?” She asked.

“I know your father will never say anything but he is tired of you running around doing nothing meaningful!”

“Mama Etinosa!” A tall and slender man in his early sixties said. They never knew he was standing close to the door. “Leave this boy alone.”

She glanced at him and hissed. “Why should I when he has refused to listen to me?”

“Can’t he play football again? It is also a form of exercise. I will advise you to join him next time. You need to shed some weight.”

Etinosa burst into laughter and quickly covered his mouth the moment his mother made eyes contact with him.

She eyed both of them. “I don’t blame you and your son. Instead of you to advise him and emulate my friend’s son but you won’t listen. You would rather support him.”

“Why won’t I support him?” Mr. Vasco asked his wife. “He plays very well and if he wants to be a professional footballer, I will give him my blessings.”

“God forbid!” She said and snapped her fingers. “Not in this house. He will go to school and behave like Osaro. That boy is a good example and I wonder why Etinosa has refused to get close to him. Osaro goes from the house to school unlike the dullard that insisted he wants to live in the hostel when he miraculously enters the University. Osaro comes back home after his lectures. He assists his mom in the kitchen and reads his bible every day.”

“How do you know all these things?”

“I go to their house and I am aware Osaro has invited Etinosa to church programs and even night vigils. He always gives him silly excuses.”

She faced her son and continued. “Pray to God that you should pass when your results come out in few days’ time otherwise one of us will leave this house.” She walked out of them.

“I don’t know why mom keeps comparing me with Osaro.” Etinosa said to his father. “Is it by force to behave like him?”

He grinned. “Thank you dad.”

Mr. Vasco cleared his throat and wore a serious facial look. “But don’t put me to shame. I hope you will pass.”

“I will dad. I had a minor issue in the examination hall the first time. I won’t fail a second time.”

He faintly smiled and left.

*****
Two days later, in the evening, Osaro was holding a bible and a wallet. He was dressed decently in black pants, yellow long sleeve shirt with a brown tie. He was wearing leather sandals on his feet. Osaro went into the residence of the Vasco’s and requested to see Etinosa.  When he came out, he invited him to a night vigil close to his school.

“But you promised to follow me the last time I invited you.” He said in a calm tone.

“I am busy, maybe another time.”

Mrs. Vasco voiced out. She had been listening to their conversation at the dinning. “You must go!”

Etinosa knew his father was yet to return and it was an opportunity to force him and follow Osaro. He grabbed his stomach and started shouting he was having severe pains. His mother panicked and ran to grab olive oil to rub on his forehead and belly. Osaro began to pray until Etinosa said he was getting better. Osaro decided to go alone. He requested Etinosa should stay at home and rest.

*****
The following day at 5:30pm, Etinosa and his parents were gazing into a laptop. The three of them were about to check online his result when they heard the siren of police vehicles close to their house. They abandoned the computer and rushed outside to check what was happening.

Their jaw dropped as they watched Osaro whisked into the car in handcuffs. Etinosa noticed he was leaping. Mama Osaro was weeping hard. Her friend went to console her and asked what happened. Mr. Vasco went to meet one of the policemen for answers.

“He is an armed robber.” The officer said in a loud voice for everyone to hear.

Neighbors, passerby’s were in shock.

“It is impossible!” Mama Osaro cried. “My son can never be an armed robber. My son went to church.”

“Lies!” the officer said. “He managed to escape last night but we caught the other members. Did you ask the cause of the injury on his leg?”

“He said he mistakenly fell into the gutter on his way home and that I shouldn’t worry, he would take care of it.”

He gripped Osaro out of the vehicle and raised his trousers upwards. He removed the scarf he used to tie the leg, Osaro whimpered in pain. All of them saw a deep sore, dripping blood.

“He was shot before he ran away!”

She placed her hands on the head. "My life is over! I trusted my son! Oh my God!"

Everyone exclaimed in shock. Etinosa shook his head when his mother looked at him. She was speechless. He went back into the house to check the result by himself.

After few minutes, his parents marched into the house. Etinosa was all smiles.

“I passed.” He said and showed them.

Mr. Vasco hugged his son cheerfully and congratulated him.

Congrats o" Mrs. Vasco said softly and scratched her head before walking away to her room. She got there, entered and shut her door with the key. Etinosa and his father could hear her crying.