1. Snails can carry stuff up to 10 times more than their own body weight while vertically placed.

2. Salt and sugar are poisonous to snails. 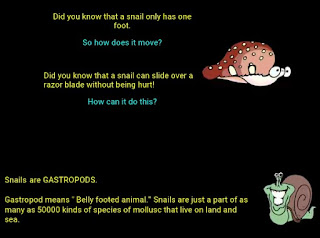 3. Snails can not see very well so they rely upon their good sense of smell to help them find their way.

4. They are not able to hear and unlike other animals, they can not make sounds to call out to their prospective mate; thus, they use touching as a way of courting.

5. It is difficult to distinguish between male and female of the species as they are hermaphrodites.

6. Not being great fans of brightness since they are nocturnal animals, snails become active at night or on cloudy days.

7. Contrary to the popular belief, snail slime does not carry harmful bacteria.

8. They have flexible bodies and can comfortably slide over sharp objects without cutting themselves.

9. There are two pairs of tentacles on a snail’s head with the eyes located on the longer ones while the shorter ones assist in smelling and feeling.

10. Baby snails are born with tiny shells on their backs and have bodies that seem almost transparent.

12. A snail’s shell is made of calcium carbonate which becomes stronger with age if the snail consumes a calcium-rich diet. Contrarily, the shell turns brittle and cracks up if it lives on a diet containing less calcium.

13. It is due to the slime that snails are able to move upside down, around corners, and through other various trajectories without falling.

15. Just as a tree’s age can be calculated by counting the rings formed inside its bark, one can determine a snail’s age by totaling the spiral rings on its shell. Each year, a new spiral ring grows on a snail’s shell, referred to as a whorl.

16. A land snail has rough hooked teeth attached to its tongue which helps it to scrape tiny bits of leaves, fruit and other foods. These teeth are called radula.

17. Snails are feasted upon by many natural predators like beetles, chickens, ducks, geese, birds, toads, turtles and snakes.