1. Up until 7 months old, a baby can breathe and swallow at the same time.

2. A baby cannot taste salt until it is 4 months old. The delay may be related to the development of kidneys, which start to process sodium at about that age. 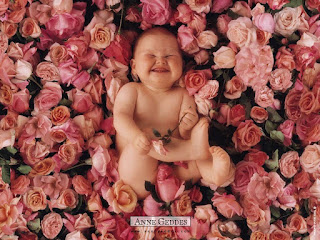 5. Newborns are more likely to turn their head to the right than to the left.

6. The inner ear is the only sense organ to develop fully before birth. It reaches its adult size by the middle of pregnancy.

7. A baby can recognize the smell and voice of its mother at birth. It takes a few weeks before a baby can see the difference between its mother and other adults.

8. A baby’s first social smile appears between four and six weeks after birth.

10. In the United States, more babies are born on Wednesday than on other days of the week. Sunday is the slowest day.

11. An average baby will go through approximately 2,700 diapers a year.

13. In Ancient Rome, an olive branch would be hung from the front door of a house if a boy was born, and a strip of woolen fabric was hung if the child was a girl. Eighteenth-century London houses hung strips of ribbon on their doorknockers: pink for a girl and blue for a boy.

14. The Apache Indians ritually killed one twin, arguing that the mother did not have sufficient milk to feed two infants, and some Eskimo tribes left one twin outside to die in the cold.

15. Babies typically prefer a female voice over a male voice, which may explain why people raise the pitch of their voice when talking to babies, otherwise known as “motherese.”

16. In four or five out of every 100 newborn babies, there is discharge of milk from the nipples. This is due to unusually high levels of the mother’s hormones that leak across the placenta during pregnancy. Premature babies never have this discharge, only those who are full term.

17. A baby’s head is proportionally huge, being one-quarter of the total body length, compared to only one-eighth of the total adult’s length.

19. Research shows that a baby responds positively to the fragrance of its mother’s breasts and ignores breast pads used by other women. Even more striking is the discovery that a blindfolded woman has the ability to identify her own child from a host of other babies by scent alone.

20. New babies prefer looking at a drawing of a face rather than a random pattern, and they prefer smiling faces to grumpy ones.