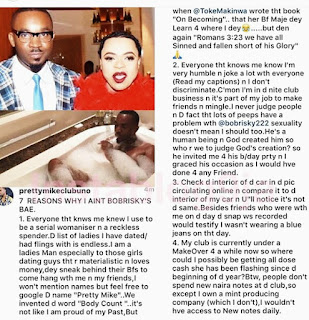 A club owner Mike Uno came out to list seven reasons why he is NOT Bobrisky's bae after he was accused to be his gay partner. I see no reason why he should. Does he really owe anyone an explanation? For what he did, I believe he could be lying. He might not even be Bobrisky's bae but a closeted gay man. I have listed my own seven reasons why his reasons no follow at all. 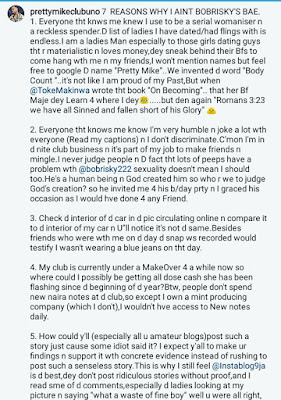 1. Who are the people that know you are a serial womaniser and a reckless spender? Whether you and your friends invented the word ‘body count’ that does not mean you are actually straight. You could be gay or bisexual. Some married men swing both ways not to talk of you that is a single guy and linked to be a friend of a cross dresser.

You call yourself pretty. Why? I am certain you created that yourself and probably feel fly when people address you as that. Cute, Handsome, Sexy and even Fine would have been better but who am I to tell you what to call yourself.

2. Everyone knows you are very humble and joke a lot with everyone. Abeg who are the ‘Everyone’?  Are they not your close friends and family that can cover up for you? I don’t know about others but I don’t judge Bobrisky. He has his life to live and he will receive his reward on judgment day, same for you and me too!

3. Are you trying to tell us you have only one car? Odiegwu! You love fashion; you can wear different outfits in one day. Do not deceive yourself.

4. Did you call Bobrisky a ‘She?’ WTF! Is that how you see him? Gays, bisexuals and even trans-genders are identified as a ‘HE’ There is a huge difference between a male and female. Please research.

Makeover or not, you are capable of spending big! Are you not a big boy again? It makes no sense at all claiming not to be the one giving him new naira notes because people don’t give such in clubs. Na today! You can get the new notes from the bank(s) you have account(s) with and I agree with you on this, you certainly cannot have access to new notes daily, but how many times have Bobrisky posted the money his bae gave him? Few times and not every day!
I came across this photo. Abeg is this not you spraying new notes? Your explanation get K leg. 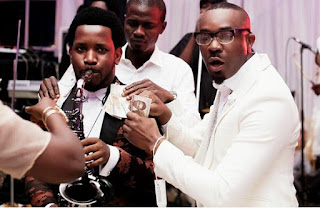 5. Just because ladies commented ‘what a waste of fine boy’, you confirmed your cassava is a waste, claiming to be in a serious relationship. Is that guilty conscience? 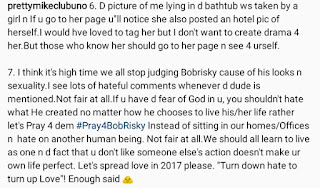 6. The girl you claimed took that photo could be your sister, cousin, platonic friend and even Bobrisky himself. Closeted gays are extreme womanizers and they act that way to cover up their acts. They allow women flock around them like bees to avoid suspicion about their sexuality.

You put this upon yourself for posting a photo of you in your bathtub and talking about Bobrisky birthday when you know the controversy surrounding him. Perhaps you are trying to please him for not showing your love for him publicly. You open your yansh. Clap for yourself! *in Nkechi’s voice*

7. Bobrisky came out to say he is not gay and he would get married someday. He said he is with his bae because of survival. No wonder the lady he slapped called him a prostitute. Why did you say we should pray for Bobrisky? I thought you saw nothing wrong with his way of life. Are you scared of 14years imprisonment? Do not. Nigeria is a lawless country!
If you had kept quiet, you would have left the amebos guessing or even forget someone like you existed but no, you responded, took your time and wrote baseless reasons why you are not Bobrisky's bae, which drove unnecessary attention to you. Wherever you go, people would point at you as a homosexual. You brought this upon yourself!

When the news came out you were Bobrisky alleged bae, I thought you were not going to respond to the allegation. If you are so sure of yourself and believe people around you know about your past sexual escapades with women why do you have to explain yourself? You owe no one any explanation and coming out to deny it makes me think otherwise!