Lady writes about her unfortunate sexual experience in the hands of a fake pastor.

Freeze shared this on his Instagram page.
I am from a very religious home, my mum believes in pastors and d word of God a lot, any program in church, we will be forced to go, some years back, I had some setbacks so my mum advised… 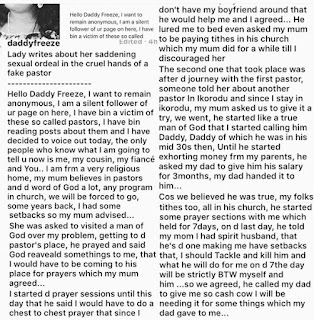 She was asked to visit a man of God over my problem, getting to d pastor’s place, he prayed and said God revealed somethings to me, that I would have to be coming to his place for prayers which my mum agreed… I started d prayer sessions until this day that he said I would have to do a chest to chest prayer that since I don’t have my boyfriend around that he would help me and I agreed…

He lured me to bed even asked my mum to be paying tithes in his church which my mum did for a while till I discouraged her. The second one that took place was after d journey with the first pastor, someone told her about another pastor In Ikorodu and since I stay in ikorodu, my mum asked us to give it a try, we went, he started like a true man of God that I started calling him Daddy, Daddy of which he was in his mid 30s then. Until he started exhorting money frm my parents. He asked my dad to give him his salary for 3months, my dad handed it to him…Cos we believed he was true, my folks tithes too, all in his church, he started some prayer sections with me which held for 7days, on d last day, he told my mom I had spirit husband, that he’s d one making me have setbacks that, I should Tackle and kill him and what he will do for me on d 7th day will be strictly BTW myself and him …so we agreed, he called my dad to give me some cash cos I will be needing it for some things which my dad gave to me…

Getting to d name of the street he gave to me, I called him I was on the street, he asked if I saw a hotel on d street that I should enter into d hotel, I saw him by d reception, he collected d money my dad gave me, he booked a room and we went in together. I asked him why we used a hotel, he said hotel is better than any other place and of which he said some pastors are coming with him. I asked where dey were, he told me they were all engaged. Getting to d room, he started d prayer sections, I felt it’s cool, shebi we are praying, he asked me to continue praying, he went to d bathroom, filled d bucket there with water, prayed into d water and asked me to go bath with it
I went into d bathroom, undressed and started bathing, he asked me to open d bathroom door that he has to pray for me while bathing which I mumuly did.

As I was bathing, he started scaring me with my spirit hubby bin around and he trying to kill me, I was scared to death, he was now like d only thing I can do to scare him away is make him jealous, and that I have to do it immediately so he can leave me, if not d spirit husband will come in full force to disrupt my life. I gladly opened my legs.
Out of fear, I did, while having sex he asked me to be praying, in tears I did, tired of life, he was like I should not tell anyone abt what happened BTW us….
Getting home, my mum asked wats up, couldn’t tell her what I went thru, he had d audacity to call my dad for more money with they gave.

My folks will be like we should go to his church, I would say no, I got discouraged about going to church, I couldn’t tell them what and what I had went thru..
This fucked up pastor did same thing to my cousin, that’s how my cousin even got to know abt his bullshit And we have bin quiet abt this for years until this day that I am telling you… I can’t tell my mum, I don’t know how to tell her now and how she will feel… My confession….

********
Seriously was she naive or stupid to sleep with him? Being afraid of a spiritual husband should not have stopped her from leaving the bathroom,wear her cloths and storm out of the room! Reporting to her parents should be the first thing she did when she got home.
at December 09, 2016