What Really Went Wrong Between Lillian Esoro and Ubi Franklin?

Marriage is meant to be a lifetime commitment but these days e get as e be! Divorce and separation has become rampant and a thing of joy for some couples. As for Lilian and her estranged husband, after the birth of their son four months ago, their marriage hit the rocks. Their posts on social media revealed there was fire on the mountain! 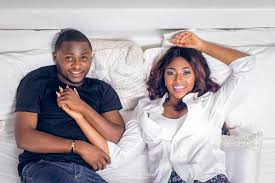 Before their wedding, Lillian called off the affair, un-followed him on Instagram, deleted her photos and moved on. Some believed the reason she broke things off was that she was a victim of emotional and physical abuse. Others accused Emma Nyra because of her past relationship with Ubi of which she denied and accused him of beating her up when she was part of his record label. Na only God know the truth.
Before we knew what was happening, fans were surprised when Lillian and Ubi announced they were getting married. During the celebrated occasion, it became obvious she was pregnant. I believe she wanted to get married, to avoid being labeled a Babymama.
Well, I thought things might not be very rosy in their marriage and they could work things out later but it became obvious that they might never get back together when she chose not to post an anniversary message for him and did not congratulate him when he opened a restaurant.

Accusations & Some comments from fans

Ubi posted a message on his Instagram page and some of his followers begged Lillian to forgive and take him back. 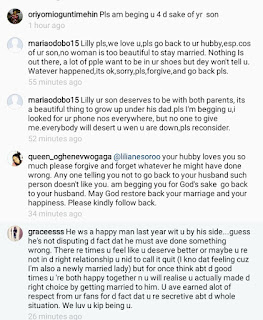 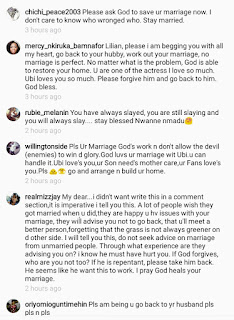 Why should she forgive him when they absolutely dont know the reason(s) for their seperation, it is only both of them that actually know what went wrong. If really Lillian is a victim of neglect, adultery and domestic violence, I think she has every right to walk away. They keep saying forgive him, forgive and forget, take him because of your child, what if she goes back and one day he loses his cool, hit her and something bad happens? Will the same people not ask why did she go back?
Marriage should not be about pity. It should be about God, love, friendship, patience commitment and unity. Okay, Lillian Esoro eventually listens to her fans, take Franklin back but will that be enough to stay married to him for a long time, I don’t think so. Her happiness is very important.

On the other hand, she could also be at fault. She has been accused of cheating on him with a Nigerian footballer Omeruo, having an affair with Golden club owner, former commissioner of Agric of Abia state among others. Even if they are lies, there is an iota of truth in every rumor. 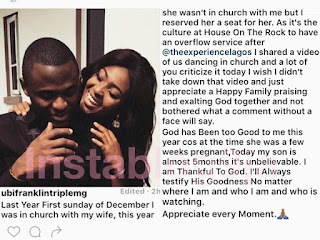 Ubi has been RANTING on social media about his marriage and I think it uncalled for. Stop trying to play victim and make Lilian look bad. Even though she is back in Nigeria, not living with him and currently on set, if he wants to get her attention, why can’t he find the location of where she is acting or meet her at the hotel she is staying. I know material things is not everything, but he could buy her a gift, pay a singer like Timi Dakolo to sing for her and even record a video of himself apologizing for his mistakes and send to ONLY her.

He does not even have to pay for a musician. He can get Tekno to sing for her and he would probably change Diana's name to Lillian. The names sound alike! Lol He should do things to make her laugh so that she could recall the good times. He should take his private life out of social media. Whatever the reason(s) they are not together for now, two of them should settle it amicably and become friends for the sake of their child.

If Lilian decides to get back together with Ubi because of pity, what people might think about her being a divorcee or because they have a son together, I don't think it will work. It has to be for the reason that she still loves him genuinely, make things right again, and ready to put away the past behind, and move on!


Make I stop here and mind my business but will they ever get back together again? If they do, congratulations in advance! If they don't, Ubi or Lillian should write a book and spill!
at December 06, 2016