A young woman, Michelle Carter was found guilty by a jugde for involuntary manslaughter. She sent her boyfriend dozens of text messages persuading him to commit suicide and she ptomised to look after his family when he is gone. 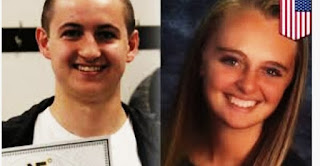 The Judge Lawrence Moniz announced his decision on Friday morning in Bristol Juvenile Court, which was greeted with sobs from the courtroom. She is charged in the suicide of her 18-year-old boyfriend, Conrad Roy III.

Conrad Roy was found dead of carbon monoxide poisoning inside his truck in 2014.
Prosecutors say Michelle Carter sent her boyfriend, Conrad Roy III, dozens of text messages urging him to take his own life. Michelle's lawyer argues that she tried repeatedly to talk him out of it and only began to support the plan when it became clear he would not change his mind.

Carter: 'But the mental hospital would help you. I know you don't think it would but I'm telling you, if you give them a chance, they can save your life'

Carter: 'Part of me wants you to try something and fail just so you can get help'

Carter: 'So what are you gonna do then? Keep being all talk and no action and everyday go thru saying how badly you wanna kill yourself? Or are you gonna try to get better?'

Roy: 'I can't get better I already made my decision.'

Roy: 'if you were in my position. honestly what would you do'

Carter: 'I would get help. That's just me tho. When I have a serious problem like that, my first instinct is to get help because I know I can't do it on my own'

Roy: 'Well it's too late I already gave up.'

Carter: 'Always smile, and yeah, you have to just do it. You have everything you need. There is no way you can fail. Tonight is the night. It's now or never.'

Carter: '(D)on't be scared. You already made this decision and if you don't do it tonight you're gonna be thinking about it all the time and stuff all the rest of your life and be miserable.

You're finally going to be happy in heaven. No more pain. No more bad thoughts and worries. You'll be free.'

Carter: 'When are you gonna do it? Stop ignoring the question'

Carter: 'You can't keep living this way. You just need to do it like you did the last time and not think about it and just do it, babe. You can't keep doing this every day.

Roy: 'I do want to but I'm like freaking for my family I guess. I don't know.'

Carter: 'Conrad, I told you I'll take care of them. Everyone will take care of them to make sure they won't be alone and people will help them get through it. We talked about this and they will be okay and accept it. People who commit suicide don't think this much. They just could do it.'

Prosecutors said the then-17-year-old Carter relentlessly badgered Roy through texts to act on his suicidal thoughts and she told Roy to "get back in" his truck after he became frightened and got out. Her lawyer defended her by saying she tried to talk Roy out of suicide for months, but he was determined to kill himself.

Carter cried as Judge Moniz detailed her conduct in explaining how he reached his verdict, but she remained stoic when it was formally pronounced.

"This court finds that instructing Mr. Roy to 'get back in' the truck constitutes wanton and reckless conduct by Ms Carter," the judge said.

He said Carter had a duty to call someone for help when she knew Roy was attempting suicide. Yet she did not call the police or Roy's family, he noted.

"She did not issue a simple additional instruction: Get out of the truck," the judge said.

The judge ruled that Carter, now 20, can remain free on bail but ordered her not to make any contact with Roy's family. She is also forbidden from leaving the state. She is likely to face 20 years in prison. A sentencing hearing has been scheduled for August 3.
at June 20, 2017