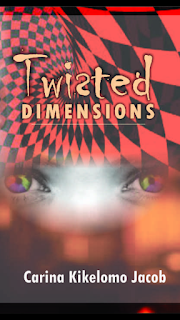 At 9:11, Joshua and Savannah heard a knock. Their eyes met. A comely woman motioned in, and Savannah suspected she was her new partner. Iris greeted only the director. Unbothered Savannah rose and faced Iris direction.
"Good morning, detective."

"Morning," she replied without looking at Savannah's direction.

"You are late, detective Iris," said the director. "This is unlike you, what happened?"

The director smiled and introduced the women to each other. Iris examined Savannah visually. Iris thought she looked presentable and gave her a weak smile. Savannah extended her hand, and Iris phone began to ring. Iris purposely answered the call quickly. The psychologist dropped her hand warily. After Iris finished speaking for a few minutes, she ended the call and looked at the director.

She spoke, "Sir, a detective investigating a kidnap case called me. He informed me about a teenager's body found in a secluded area around Lekki Phase 2. No one was able to inform me early enough because my phone was unreachable. They have transported the body to the lab. I need to go see Dr. Nicholas now."

"All right, no problem." he glanced at Savannah beaming. "I believe you are ready to work on your first official case."

She smiled brightly at him. "Yes, I am."

Iris felt irritated by her boss and the inexperienced psychologist. Iris walked out of the office, and Savannah followed her instantly. She did not want her to leave her behind.

Savannah tagged along with her to Iris car, a 2018 black Toyota Camry, a gift from her husband a year ago when things were still working perfectly fine between them. Iris unlocked her car, and they both entered. Iris brought out her Gucci sunglasses from her pigeonhole, put it on and turned the ignition of her car to drive away.

Iris drove to the institute without uttering a single word to Savannah, as if she was not there. Savannah cared less. No matter her undetached attitude, she was going to do what took her there. They arrived at the institute at 10:50 am. Iris entered the hospital with Savannah by her side.

They went into the lab and met Doctor Nicholas observing the lifeless body of a teenage girl placed on a stainless table. Her private parts covered. The place smelled of dead bodies but Savannah controlled herself not to react to it. A young man dressed in a lab coat was with the doctor as they examined the body. Iris greeted them without thinking of introducing Savannah.

"Who is this with you?" Nicholas asked detective Iris.

Iris slightly wore a frowned face. "Savannah Thomas. She is a psychologist working with me now." She refused to stare at the psychologist. "Savannah, this is Dr. Nicholas Akintola and Emeka Okoye, his intern."

"You mean you have a partner now?" Emeka chipped in to ask.

"Well, something like that," she said while giving him a disapproval look.

"Pleasure meeting you, doctor Akintola," she said and turned to the direction of Emeka. "And you too."

"It's nice to meet you too," Emeka said with a wink.

What is the problem with these people? Iris asked herself silently.
Unknowingly, she hissed aloud. All threw their attention at her. The medical examiner asked her if everything was okay; Iris smiled and told him all was fine. Savannah knew she hissed because she was getting their attention. All Savannah had to do was ignore Iris unconcerned behaviour. The examiner resumed to inspect the body and explain the outcome of the autopsy. It was not the first time Savannah saw a dead body, but it has been long. At times, a few years ago, she would follow her dad and his partner to crime scenes, especially if Perry knew he was going home late.
Iris glared at the body and questioned. "How was the victim seen?"
"Her body was positioned flat on the ground," Emeka answered. "There was dry blood all over her body and clothes."

"Where are the clothes?" He pointed to a thick sack on a table.

"What about the victim's shoes?" Savannah asked after a few seconds.

The three of them immediately turned their gaze at her.

"We didn't see any shoes," said Emeka. "At the crime scene where we saw her, there was no phone or bag. The only thing found was inside the pocket of her trousers. It was a wallet filled with money, some of her passport photographs, school, and national identity cards. She was also wearing a wristwatch. I took them out when I arrived here before covering the body to wait for Doctor Nicholas."

"That means it wasn't a robbery. Her money is still intact." Iris said.

Emeka walked to the belongings of the victim and gave the wallet he kept inside an evidence bag to Iris. He handed over gloves to wear, to verify the contents. She checked inside the purse to count the money, placed it back, brought out her school card, Savannah quickly stretched her neck to glance at it.

"Her name was Stacy Orji," said detective Iris. "She was a beautiful girl."

Iris thoroughly observed the wristwatch. She kept it inside the bag. She removed the gloves and disposed them inside a wastebasket.

Savannah bluntly said to them. "I doubt the killer killed her where you found her."

They all looked surprised with what came out of her mouth.

"And why would you say that?" asked Iris. She removed her sunglasses to look her straight in the eyes.

"Based on her school identity card, she's a student of Choice Martins Private University which should be expensive. What will a girl like this be doing in a place fully dressed without any shoes on?" Savannah asked and tried to explain in her way.

"I think she was homeless," Emeka said. "Maybe she was thrown out of her house, having nowhere to lay her head."

"Even if her family kicked her out of the house, she has a school hostel to go to."

"Her purse," said Iris. "Even if she was thrown out or wasn't able to go to her hostel, she could have been able to use part of the money found inside her wallet to pay for a cheap hotel to spend the night. Her wristwatch is a Rolex, original for that matter. She might be from a wealthy home, working part-time or maybe have a rich boyfriend."

"That could be true," said Doctor Nicholas. "Also, there was no evidence of a sexual assault." He pointed at the wrists of the dead girl. "No defensive wounds too. I'm certain she didn't expect it or rather saw it coming."

"What is the cause of death doctor?" asked Iris.

"She bled out through multiple stab wounds on her torso. It was eight times. The cuts were bottomless, and one of the stab injuries penetrated one of her ribs which caused internal bleeding too."

Savannah closed her eyes, the thought of the victim thrust with a sharp object so many times made her body quiver as she tried to imagine the terrible scene, the pain the victim must have gone through before giving up the ghost. She opened her eyes to see Iris smiling, cracking a joke with Doctor Nicholas.

How cold can she be? She did not even show any emotion.

Savannah said. "I think the killer murdered her somewhere else, then dumped her body at the scene."

Iris turned at Savannah with a well-done smile on her face and back at Nicholas. Savannah presumed she was impressed. Iris asked Nicholas what the murder weapon might be. He told her it was a knife.

Emeka spoke. "The kind of knife used on her was double-edged and had a pointed blade about twelve centimetres long. The blade and the tip were very sharp to have penetrated the victim."

"That should tell us that the killer was prepared to kill her," Savannah said. "It was deliberate."

"Is that all you can tell me about the victim, doctor?" Iris asked, putting her sunglasses back on.

"Yes for now but I would give you an update whenever I find out more. I would run some tests too and send a mail."

"Okay. Have you been able to determine the time of death?"

"Based on the decomposed cells and body fluids it was less than twenty-four hours before she died and it should be between 5 pm to 8 pm yesterday," he said.

She promised to keep in touch before leaving with Savannah. They were on their way to see the victim's parents.

To complete it, buy for a token.

If you want Twisted Dimensions sent to your mobile as a PDF EBOOK, all you need to do is send a mail to kikeebook@gmail.com for confirmation of payment to 0127593343 Guaranty Trust Bank (GTB) The fee is 2k only!

Links to AMAZON to BUY

PLEASE POST or inform/tag FICTION/CRIME LOVERS YOU KNOW! Someone you tell might want to buy! You can read free chapters (3) of the book on my blog! THANK YOU, HAPPY NEW MONTH & GOD BLESS❤