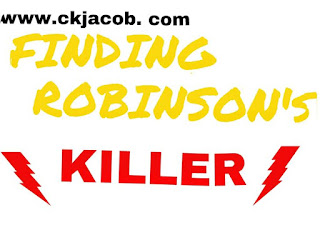 
“Jeff.”
I introduced myself to him. “Are you sure Robinson was a stripper?” I asked him again because it did not sound pleasing and factual to me.
“Yes.” he replied. “He was a stripper at a private club.”
“Are you aware he had a day job?”
“Yes. I know he works for a company but I don’t know which company. He kept it away from him and I caught him wearing a suit on a Monday morning few months ago. I was surprised to see him dressed in that way, so I threatened to trace him if he didn’t tell me. He had no other choice than to open up.”

I touched him on the left shoulder. “If you lie to me I will surely find out the truth. Have you ever quarreled with him?”

He swallowed. “Yes. We quarrel all the time.”

I dropped down my hand. “Money is the root of all evil. He owes you money, he refused to pay and you got angry and you killed him.”

“I did not kill him. Robinson being a stripper puts money on my table. He was my source of livelihood.”

I led him to the living room. I needed to rest my legs. I sat down with him. “Do you suspect anyone in the club that could do this to him?”

I saw tears drop from his eyes. He looked away from my direction.

“No.”
I smiled cockily. “That’s not true. If you really want me to find Robinson’s killer, tell me the truth.”
He turned his face at me. “I am so sad he’s dead. Robinson was a nice and gentle guy but he loved money that is why we were always having issues. I suspect two people. One is a stripper named Tunde and the other a customer’s husband. Robinson was sleeping with his wife.”

“I guess this customer threatened him.” I said.

“Oh I see. Why did you not advise him to stop? If you really had the keys to his home don’t you think he considered you a friend?”

“I have his keys because I am his cousin.”

I widened my eyes in surprise. “If you are his cousin then you are a foolish man.” He glared at me like a wild cat. “I’m not scared of you Mr. Jeff. I am the one with the gun. You are family yet you could not caution him to detest from sleeping with other people’s wives?”
“I warned him several times but he would not listen. He enjoyed it.”

I thought of my wife Nkem. What if I caught another man on top her? What will I do despite no longer sexually involved with her because of the divorce I want? Well, I would cut off his penis. That will not kill him and it will not make me a murderer.

I said to Jeff, “Why are you suspecting Tunde the stripper?”

“They fought over a woman.”

“Is she also a married woman?” I asked.

He shook his big head.

I sighed tiredly. “Is there an eatery close by?”

He glanced at my face as if he saw a ghost. I was hungry for God’s sake. I can’t starve myself because I am investigating a murder case.

“Yes.” He replied and described the place for me.

I brought out my small note pad and a pen from my suit jacket. I gave Jeff to write the contacts of Mrs. Ekaette and Tunde. I intend to interview them. He wrote them down and he collected my phone number too. I rose on my feet ready to bounce out and fill my stomach. I walked to the door before asking him a question.

"If Robinson kept on depriving you of the money you deserve, why did you not change client?”

“Even if he doesn’t pay me his elder sister will.”

My left eyebrow lifted up. “He has a sister?”

“Yes… oh no! How will I tell her Robinson is dead?” He placed his hands on his head and dropped them down.

“Are you realizing that now?” I did not allow him answer me. “Give me her address and phone number.”
********
After Jeff gave me the contact, I drove to a restaurant to eat lunch. Nkem called my phone three times without me picking. I had nothing to say to her. I drove to the victim elder sister’s abode and a young slim boy opened the door for me. I saw her, his sister, a beautiful woman with grey eyes. She was already crying, fidgeting, her hands were shaking. The fool had called her to break the news through the phone. I gave her some time before I spoke to her.

“I’m deeply sorry for the loss of your brother.”

She cried more. I gave her more time.

At last, she said to me, “Have you found Robinson’s killer?”

“Then why are you here?" she asked. ”Shouldn’t you be out finding who killed my brother?”

I cleared my throat. “Do you have any idea who could do this to him?”

She cleaned her face. “I really don’t know. Robinson’s kind of lifestyle was disturbing. He was a gentle man at work in the morning and a stripper at night.” She sniffed her nose. “I remember a dark and very tall young man with a big scar on his right side of his face. He threatened Robinson few weeks ago in my presence. He said Robinson was sleeping with his mother. I begged on my knees that day. He vowed if Robinson tried to contact his mother again he was going to kill him.”

I left there and went to the station for some paper work and report. In the evening, I went home, a one bedroom flat I rented only for myself. I rested, later had my bath and had tea and biscuit for dinner. I have to be truthful to myself the only thing I will miss about Nkem was her taste of food. I went to bed at 10pm. As I closed my eyes to sleep, my phone rang with an unfamiliar number. I picked.

“Is this the detective investigating Robinson’s death?” the male caller asked.

“Jeff told me the sad news," he said. "He came to my house to cause commotion, accusing of killing Robinson. I collected your number from him.”

I shook my head piteously concerning Jeff, a complete idiot. “Who is this?” I asked him again.

“Oh I see. I will like to interview you on Monday at the station.”

I heard him chuckle. “You are wasting your time,” he said in an orotund voice. “I did not kill Robinson. We had an argument over a woman in the past. He won her love and she became his girlfriend and I concurred.”

So Robinson had a girlfriend, I thought.

“I was angry at first but that will not make me kill someone. Take care detective but if you insist to still interrogate me no problem, but to tell you the truth you will be wasting your time instead of finding Robinson’s killer.”

I pressed the end button. He was also wasting my time.