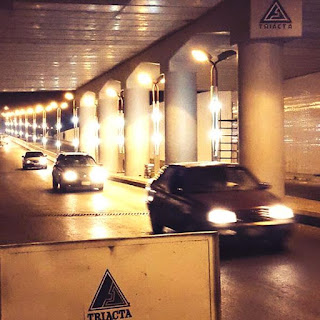 In a crisp legato, the song eased out. Some mid 90's oldies blew its rhythm into the air-conditioned highlander jeep. It was mid-summer and the second jeep that found its way into the liabilities of the Onolas. The weather was familiar but not intruding, a condition the family had seized to make their long distant trip from a three weeks family holiday. The Onolas smiled and provided mannerism to the perfect outburst of the songs as it played simultaneously. Jude had four kids; Gideon, Hosea, Tonia and Bryan, all seated at the back while his wife Lola was by his side giving him all the support to forbid a doze off - that wouldn't happen though. Apparently, they were in high spirits, Jude had taken a swerve from a vicious pothole that mapped a portion within a hundred meters. Home was three hours away. They were returning from the Constantine Mountains where they had camped for three weeks to burn out their holiday and consume freshness. The outing was a headstat for the kids and a leverage to parental business.


They seldom took such trips, but after a big contract hit by Jude, “what the heck? Let’s blow some money!"... It was a luxurious feeling Jude had personally conspired to give his family if he made a big hit, not just for a family netflix but to also cement an adventurous marriage that had tuned into a mega friendship.


"We should do this all the time." Jude turned to tell his wife. She returned a smile, patted his laps as the jeep shortened the distance. Jude descended through a coarse slope, took a turn to burst out from a cowardly two lane to one. He chatted his wife whose attractive cleavage caught his eyes more often than not. The kids obviously were embroiled in the memories they had just left behind - Hosea was dozing. The jeep was on a 120mph,Jude wasn’t oblivious to it and he almost made a "so-close" to another pot hole that jutted out of nowhere.

Jude hissed. "Pathetic government, the roads are all bad."

They soon hit some speed breakers, a quick fix that was adjacent the charred remains of an 18-seater bus. "That should be recent," Jude told his wife as they continued drawing more awareness to the children who looked through the windows without any streak of emotion. A steyer freight trailer honked terribly as it approached from the opposite, it was a one-way lane in blushes. It approached dangerously from 400 meters, heavy with baggage.

Another minivan was silently negotiating an overtake from Jude's rear while a blue range rover in front of the Onolas jeep was pressing to beat another dismal pothole before it would jettison the incoming trailer. The pothole spread beautifully yards out causing a frictional steer that took the steyer into a run through void. The mini bus behind Jude was pressing at break neck speed to beat Jude and the range in front, the mini bus driver had imagined the trailer to be far off in his mind arithmetic. Avoiding the wide margin of a dilapidated portion was central to three folks except Jude,the collision was inevitable.

An instantaneous impact from a so-near yet heavily burdened trailer piled up in seconds a dangerously approaching minivan and a let-me-quickly-pull-through Range. The mess took a pound of Jude's quick-break-matching theory that culminated into a swift summersault. The trailer sped away with a bruise to its fender, obviously suffering from a failed brakes situation. Few more cars kissed into the carnage sending the primary victims in flames. A small baby from the van had unconsciously head butted a glass through to emerge a miracle survivor. The mangle pieces threw in a swat of traffic as the safety corps made their way into the accident scene. No survivor was found not within the mile radius with more plausibility that every candidate of that crash had been burnt beyond recognition. Some gullible ones filmed the accident with their mobile phones, seemingly detached from the emotional flames that gutted the atmosphere, it reminded the writer of the "Filmers" of the Aluu 4 killings. Perplexity had set in as to what inspired the carnage. However in the midst of it all, young Hosea who had slept through most of the journey in the Onolas jeep was brought to safety by the corps, out of nowhere, with questions hanging on every lips as to how he survived.