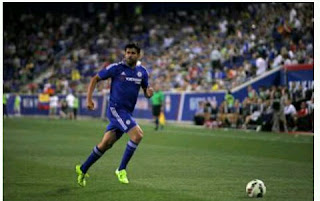 Jose Mourinho has revealed striker Diego Costa went to hospital with the rib problem hesustained sustained in the Capital One Cup loss at Stoke.

Costa came off in the 33rd minute at the Britannia Stadium, which the Blues lost 5-4 on penalties following a 1-1 draw after extra time.

In Mourinho's post-match press conference,  when asked about the striker situation, he said: