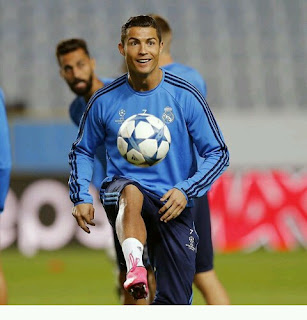 Real Madrid playmaker has been presented with the prize for Europe's highest goalscorer, pipping rival Lionel Messi to the prize.
Ronaldo has been presented with a record fourth Golden Shoe award in a ceremony on Tuesday, after scoring 48 goals in the 2014-15 season.Ronaldo collected the award, given to Europe's highest goalscorer over a season,ahead of rival Lionel Messi, as the Barcelona forward managed a total of 43 goals, two less than his La Liga counterpart.The former Manchester United attacker has won the award on three previous occasions, twice while at current club Real Madrid and once when leading the forwardline at Old Trafford.
Congrats Legend!
at October 13, 2015