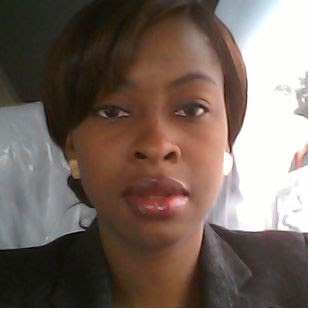 I wrote this piece few days ago but didn't know if I should post it. Well, I just did. A twitter handed told me to re-tweet her tweet about the doctor that died. I had no clue about the story but I retweeted it. 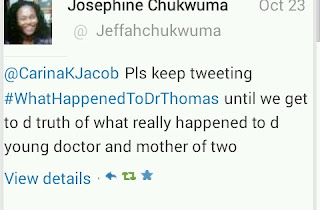 Domestic violence is one of the things I despise and I am ready to fight against it. I believe insecure men are the ones raising their hands on their women. I see no sense in it at all. Beating and slapping your woman will not change a thing. Why can’t men just walk away in a heated conversation to avoid ‘Had I known’?

My first short story/first post was about domestic violence…Enough is Enough. If you have not read it, please click here

Back to the unfortunate story, The University Hospital lost a consultant Pediatric Surgeon, Dr. Hestianna Thomas. Her husband, Babafemi Thomas, a Consultant Clinical Pathologist, is a suspect. I heard the victim’s mother was crying over the fact that her son in law was accused of killing her daughter.

Something is wrong somewhere. Some are saying she might be sleeping with him, well, humans are unpredictable.

The husband said she was suicidal. If she actually committed suicide, no matter the harm she did to herself, the result could not have been the amount of injuries seen on her body. The thing I don’t understand was the bag used to cover her head. Why should the husband cover it in the first place?
How can he see his wife covered in her own blood and he could not alert his neighbors but wiped the blood in the house, carried her inside the car and drove to the hospital? It does not make sense to me. Your wife is dying or rather dead, you still have the time to clean up the mess before carrying her.

A source said, “A close examination of her body revealed a lot of lacerations. She had a deep cut and when other colleagues saw her, they said there was a deep cut on her skull, because they saw pierced bone.

Female doctors where stunned when Dr. Thomas was rushed in.

She had a broken neck with a part of her spine protruding and there were fractures all over her body.

When you realize you have killed a loved one, I guess the pain to look at the person is difficult and I believe that is exactly what happened. He murdered her and he could not use his eyes to look at her. Guilt! Guilty Conscience!

The husband is a pathologist and he has the knowledge of covering evidence. I only hope Dr. Thomas will not be forgotten. Is there anyone investigating the case? I know we don’t have detectives here in Nigeria but at least we should have brilliant and reliable investigators or police officers.

Some people blame the woman that she should have left the marriage due to domestic violence but we don’t fully know her story.

What is her true story?

No one knows why she stayed in the marriage. The ones pointing an accusing finger at her, would still be the one to criticize her if she had divorced her husband. Some will tag her a single mother, prostitute or a divorcee.

This goes out to women that believe their husband will change after beating them. Sorry, he will not! Run for your life!!

Dr. Hestianna Thomas must not die in vain. Her death is still a mystery.

And if really Dr. Babafemi Thomas killed his wife,if he is found guilty, HE MUST NOT GET AWAY WITH MURDER.
- October 31, 2015