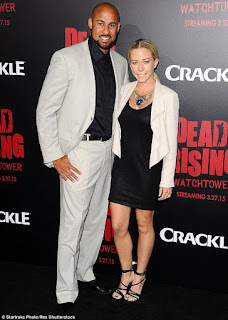 According to the report from InTouch Weekly, Kendra Wilkinson is still irritated by her husband Hank Baskett after his alleged affair with a transsexual model Ava London that she wants to end her marriage of six years.


'Kendra told Hank she wants a divorce because she can't stand to look at him anymore,' a source told the publication. 'She's going to leave him. Kendra is done.'

This report comes just days after Kendra admitted on her show that she tried to kill herself more than once. 'When I was a teenager, I battled some severe depression,' the beauty told her therapist Dr. Monica Shahbaznia on her WE show.

The Playboy cover girl then added, 'I attempted suicide a couple times. I went to a mental institution ... drugs, overdosing, slitting wrists, all that stuff.' The therapist told the star she may have not found 'safety and protection' at home.

She's ready to live her life as a single woman,' it was added. 'She keeps saying, "There must be someone better out there for me."
The breakup will happen 'soon,' InTouch added and all will be air in the show.