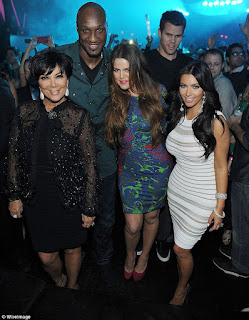 Khloe Kardashin filed for divorce from Lamar Odom in December 2013 after four years of marriage, following rumors of drug abuse and his admission to cheating on her.


But after Khloe believes they can still work on the marriage after everything that has happened to Lamar.

Kris Jenner surprisingly approves of her daughter Khloe Kardashian decision calling off her divorce from her ex husband.

The 59-year-old was asked by Acess Hollywood what the family's reaction has been to the couple's decision to give their marriage another go, and said simply: 'Nothing but love.'

The couple signed the necessary documents to end their union in July, but a judge never signed off on them, meaning they remained legally married

Kris also admits that she hopes her eldest daughter Kourtney can still make it work with Scott Disick, her former partner of nine years and the father of her three children.