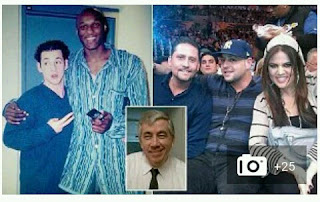 The father of Lamar Odom's best friend has
spoken out as the basketball star lies in a coma
inside a Las Vegas hospital.

Guillermo Castillo - who lost his son Jamie
Sangouthai in June as the result of a flesh-
eating bacteria he caught through intravenous
drug use - said he thinks Lamar and Jamie had
a 'death wish.'

In an interview with the New York Daily News ,
Castillo said: 'I think Lamar is done. I think most
of it is because he missed my son so much.
'I think deep inside they had a death wish, or a
wish to die together. It sounds very cold-
blooded, but I have a hard time controlling my
emotions.'

Meanwhile, surveillance video obtained by The
National Enquirer from inside the Love Ranch
brothel in Parhump shows the basketball star as
he 'pops a pill into his mouth' shortly after his
arrival on Saturday afternoon.

The owner of the brothel has also claimed in an
interview that Lamar wanted to meet the
establishment's lone transsexual prostitute when
he arrived on Saturday.

Khloe Kardashian remains by Lamar's side in a
Las Vegas hospital and on Thursday was joined
by Caitlyn Jenner according to the New York
Daily News.