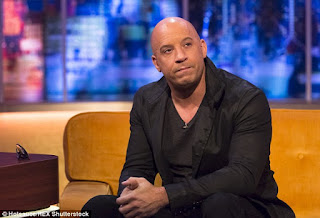 The Hollywood actor Van Diesel paid a lasting tribute to late friend Paul Walker by naming his third child Pauline.
Vin Diesel has told the touching story behind the choice, explaining that his co-star's name didn't leave his head when he signed the register for his daughter's birth. The actor made an emotional appearance on The Jonathan Ross show on Friday night. He broke down as he talked about his 'brother'.

He explained Paul's advice when he was expecting his first child, Vin recalled: 'I can remember just like yesterday he said that to me, "A lot of tough guys will tell you to wait in the hallway, don't go in the delivery room,"
'[He said] "But Vin, go into that delivery room, be present and cut that umbilical cord and it will be the best day of your life."'
'And so I did that and it was the best day of my life and so six months ago when I was blessed to be in that same situation, I couldn't help but to remember Paul and his advice.

'As I'm cutting the umbilical cord, I'm thinking to myself it's all because Paul Walker told me to go into the delivery room and so once it came time to sign the name, I started writing "Paul" and then just added I-N-E.'