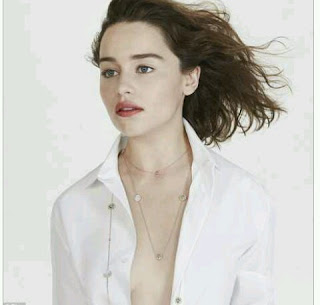 Hollywood actress Emilia Clarke to front the new Dior Joaillerie: Rose des Vents Collection.
The campaign comes after she was named Sexiest Woman Alive by Esquire magazine in October, after previously earning the accolade Woman Of The Year from GQ.

She goes braless in the images and showing off her assets, as well as the brand's necklaces in an open white shirt.

The actress was photographed by highly acclaimed photographer Patrick Demarchelier for the campaign.