Popular Fuji musician K1 the Ultimate is a proud father. One of his children has been called to bar. 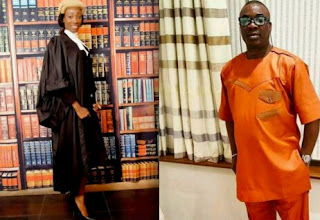 The second daughter of K1 the Ultimate has been called to bar after completing her mandatory Law School exams.

Damilola graduated from the North America University Houdegbe, Cotonou, Benin Republic. Her elder sister, Monsurat was the first to be called to the bar.