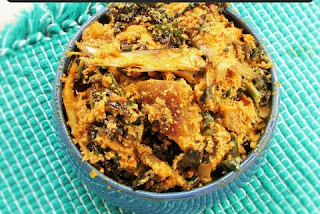 One day I was influenced by the devil himself at the age of seven, to skip the routine prayers out of childish impatience and ate an unblessed meal of pounded yam and egusi soup seasoned with my favorite caterpillars. On this evil and tempting day, mu’azu, our neighbor, an ardent pagan, was invited to share our meal. Now mu’azu was a terribly proud and notorious pagan who would jump at any opportunity to prove the folly of Christianity.

My father too had a notorious habit of inviting each and every passerby to come and eat; sharing our food that was eaten openly under the sycamore tree shed in the middle of the compound. I usually felt irked as I was just learning to cope with this passerby phenomenon. He would implore and even badger a passerby into resting. I was always glad when the passerby declined; telling my father that he had already eaten enough and my father’s food was always his. Only then would my countenance brighten otherwise, I would eat sulking, casting furtive and malevolent side-long glances at the resting passerby, forgetting that food was always reserved for me by my mother.

My father, the omniscient observer would always check this by barking at me to stop looking at people and look where I was eating, whenever anger overwhelmed me, I goggled maliciously at the unwelcome visitor. Sometimes, to checkmate the visitor’s intakes I took to gobbling which would earn me sharp rap of knocks on the forehead from father. There were cases too, when the checkmate ball that were oversized for my gullet got stuck  and father would give me an extra rap to worsen my smarting throat as a reward.

I usually made sure I counted the balls of the pounded yam, balls of “tuwo” mashed boiled corn or morsels of the yam pottage the passerby took down in all so as to contrast them against those I had eaten. I was well versed in numerical manipulation for the fact that at the age of six I had completed my second year in the bible school. In class I was best in arithmetic.

After the meal i would secretly recount to my immediate younger sister the number of balls the passerby had made and the deficit. It was usual for me to compare the sizes of those balls made by the passerby to an egg without any intent of exaggeration.

On this particular day, my fears grew and my anxiety was taut as a new drum. I ran dry of any barrel of patience. As my mother was pounding the boiled yams in the kitchen, father and I sat under the sycamore tree waiting, my mouth watering in anticipation of the toothsome caterpillar soup. It was when I had finally built a mental picture of my satisfaction that the pagan called. I dejectedly gave up the bamboo chair in which I sat to him after mumbling some half-audible greetings. I headed for the kitchen impulsively with an aim of alerting mother of the heathen’s presence when father shouted at me to come back, reminding me of the fact that kitchens were meant for women and not men.

At long last the dug-out wooden bowl that is used for washing hands made her way out of the kitchen in the hands of my immediate sister. Mother followed with the food. She was laid brimming with a shimmering white pregnancy protruding above the brim of the calabash. The lesbian marriage of egusi balls and caterpillar hug in the matrimonial home of red oil and vegetable. Halilu placed the washing bowl at the feet of the heathen as was the custom. The heathen done washing passed the bowl clock-wise, making me the last person in the round. He fell straight to the food even before father could announce prayer.

I half- halfheartedly closed my eyes, then, the sound of his molars crushing caterpillar and the glottal sound of swallowing foo-foo balls made me peep at him through the slits of my eyes. His blatant condemnation of Christ like habits that made one salivate like a dog when food was placed before him and his assertion that he would rather thank god and ask for his blessing after he had eaten, which was said between the intervals of swallowing totally convinced me.

Father’s prayers were usually long and unwinding. He would first thank god for the bodily food, thank him for the spiritual food; thank god for the rain and sunshine; thank him for the strength and knowledge to farm, his guidance through the farming season as well. He’d express gratitude to god for creating karfe and making him a capable blacksmith as to make good hoe blades. He didn’t forget to mention katako the wood carver for the perfect hoe handles. He would intercede on behalf of folks who already had enough and those that had wants that god give them more, most especially spiritual food. He would make reference the whole vast area of the kaltungo district where the people were starving from spiritual famine and this narrowed down to particular cases; mentioning names.

Midway into the prayer, I again peeped and the damage the heathen made baffled me; the pregnant mound of pounded yam had flattened below the brims of the calabash. I quickly abandoned the prayer and joined the heathen after fighting down the urge to carry the food and shift camps.

When father said amen; to which I did not respond, the food that escaped the bonafide blessing of prayer certified by “Amen” weighed against the one to be taken on “Amen-end” prayers. Like a thunderbolt, father struck at my face a blinding backlash of his mighty hand that wiped off sudden stars from my eyes and relegated me from the squatting position to sprawl. Lying on my belly like a reptile. The last ball of foo-foo I molded for the day, found itself rolling on the ground and pulling gravel that stuck to it like a profaned ball.

I had never defied prayer before then, so I found difficulty in telling what actually made father angry. Was it the pace at which he discovered the food was taken or the sin of eating a ‘’unamened meal?”
at April 05, 2016