Have you watched ATM movie? If you have not, watch it now!!! 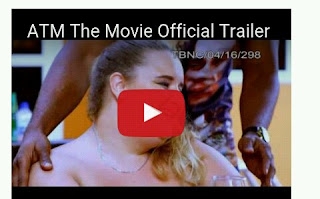 Do you love comedy? This is the right movie to watch!

It is hilarious and you will crack your ribs!!

ATM is a romantic comedy. Robinson, (Alex Ekubor) a young jobless man in his late 20s who met a white lady, Emilia ( Oyinbo Princess) via online dating and started extorting money from her in pretense that he was going to marry her. Meanwhile, he has a Nigerian girlfriend, Caroline, (Yvonne Jegede) who has been very supportive and taking care of him and his uncle Gbenga (Francis Odega).
Gbenga fell for his brother's caprices when he told him about his plan to make the 'Oyinbo' lady her ATM, by marrying her and divorce her after six months in other to inherit her wealth and subsequently marry his Naija girlfriend, Caroline.
But when Emilia arrived Nigeria, Robinson got the shock of his life...

Watch this funny movie and thank me later!
This is the link...
https://youtu.be/GIGStrQSQNg
at May 18, 2016