How many of you are watching the comedy? I am! 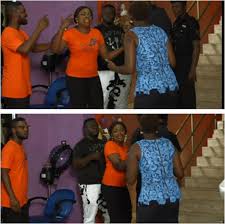 1. Jenifa: The main character has a great sense of humor. Even though she has a good heart, Jenifa is a concrete stark illiterate, a talkative, naive, industrious, naïve and annoying sometimes.

2. Segun: He is one of my favs. Sege aka helper, is kindhearted, hardworking and  I became a huge fan because of his role. He is a very good actor.

3. Adaku: She is a very funny woman. A foodie. If an entire community turns into food, she would eat everything and still not be satisfied. She’s a hypocrite, selfish but can be a good friend.

4. Pelumi: She is the villain. She’s saucy, unsympathetic, harsh, beautiful and a coward.

5. James: My love for this character can never die! He is funny, ‘pretty’ and unique. I wonder why he’s always holding his waist as if he is pregnant. He chews food and bubble gum the same way! Who does that?

6. Sam: He is boring but hardworking and quite fun to be with at times.

7. Kiki: She’s a very nice person, easy going and down to earth.

8. Genevieve aka Gene-give-me: Madam beggar, begibegi, food pincher is a funny character. The actress did a fantastic job. I miss her and I am expecting a comeback.

9. Toyosi: Serious minded, and she has a beautiful smile. She’s loves money, food, a bit lazy but nice.

10. Cordelia: I like her so much. A good friend and she treats everyone equally.

11. Tomi: I love Tomi-Tomero! She’s a no nonsense character. She’s bold, unbiased and beautiful. I was happy when she was appointed as the manager. She deserved it.

12. Randy: Oh my God! He’s always forming fine boy all the time. Woman wrapper! The way he licks his lips is irritating. I have not seen the right word in the dictionary to describe him.

13. Tania: Miss Junkie. She’s always staggering. She’s a manipulator, unserious and a bad influence. Kudos to the actress, she did a fantastic job!

14. Benny: She’s also known as Aboki and lord of the rings. A straightforward person and always minding her own business.

15. John the genius: He is a chronic womanizer and a confused fellow. He needs deliverance from stopping him for speaking English language I find hard to understand.

16. Esther: This character is a craze person in human form. She’s so small. Lol.  She acted her role very well.