1. Cucumbers come in many sizes, shapes, textures, and colors, including white, yellow, and even orange. 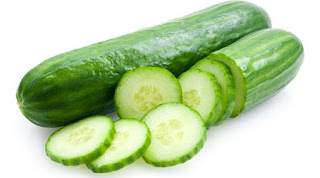 4. Pickles are cucumbers that have been soaked in a brining solution made of salt, vinegar, and water.

5. A half-cup of sliced cucumbers has 8 calories and more than 10% of the recommended daily intake of vitamin K.

6. Cucumber slices over the eyes may help reduce puffiness, thanks to the fruit’s water content and caffeic acid.

7. The biggest cucumber, grown in southern China, was 67 inches long and weighed 154 pounds.

8. Sea cucumbers are not related to the produce variety. They are just named after its oblong shape.
at September 23, 2016