DO NOT BE DISCOURAGED. HAVE FAITH & NEVER GIVE UP ON GOD!!!

In the beginning, God made heaven and earth. He created humans and placed us on earth not to doubt him. Let me tell you a true story of a young man named James (not real name) was searching for a job after five years of graduating from the university. He gave up on life because he was tired, drained and discouraged because no help came. His wealthy uncle promised to help with in an oil company but whenever he visits his rich relative, he was always giving him different excuses. 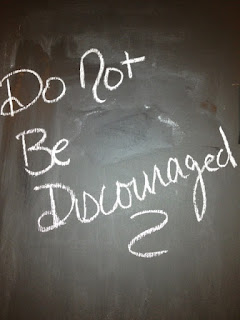 Some of his excuses are, “give me more time.
“The economy is bad but I will find a way for you.
“I am travelling to the United States, wait for few days and let me return and I will give you a lucrative job.

This young man would wait and wait, sometimes for weeks and sometimes months, nothing was forth coming. He would borrow money from his friends/neighbors. There was a time he could not pay back the money he borrowed at the time he promised to refund it, out of wickedness; his friend began to narrate him in their neighborhood. He begged he was going to return the money as quickly as possible. A graduate of petroleum engineering became a bricklayer to pay back his debt.

If you are discouraged, then you have lost hope, you are no longer determined and you have no faith in God anymore. The devil is a big lair because that is exactly what he wants. He is a destroyer and when you are discouraged, you won’t any effort to work towards what you want. No help will come when your faith in the Lord is 0%.

Back to the story, After James paid his debt, he was ashamed of himself and was eager to succeed. He became a full time bricklayer, made plans to save as little as he earns. After few months, he decided to fast and pray for three days. He used half of his savings as tithe and cried to God for a miracle. He cried to God to send his helper, someone that will help him greatly. Four days later, his uncle called and invited James to his house, he found him sick. He gave him an appointment letter from an employer of an oil company. It was given to him to give James but he kept it. He asked for forgiveness because his mind has been judging him and he has been having nightmare. James was shocked, forgives the man and went to the company the next day. James could not believe the position they offered him was still vacant. He asked the secretary how come? She said their boss has been waiting for him for a long time and he believed he would surely come for his job one day. He jumped out of excitement and praised the Lord. His faith and believe in GOD was not in vain.

Matthew 8: 5-8 says “As the Lord entered Capernaum, a centurion came forward to him, beseeching him and saying “Lord, my servant is lying paralyzed at home, in terrible distress. The Lord said to him, I will come and heal him. But the centurion answered him, Lord, I am not worthy to have you come under my roof, but only say the word, and my servant will be healed.”

As you can see the centurion did not need the lord’s presence in his home, just by having faith he knew his servant will be healed.

Jesus was marveled and said to the Centurion, Go, be it down for you as you have believed. The servant was healed at that very moment.

Mark 11:22-24 says Jesus said, “Have faith in God. Truly I say to you, whoever says to this mountain, be taken up and cast into the sea and does not doubt in his heart,, but believes that what he says will come to pass, it will be done for him. Therefore I tell you, whatever you ask in prayer, believe that you have received, it will be yours.”

Whatever challenges, do not be discouraged. Whatever difficulty you are passing through, be determined, believe and have faith that God has answered your prayers. If you know what you are searching for is important, work hard, believe in Christ, have faith in him and pray hard. Your prayers will definitely he heard and answered. Do not give the devil an opportunity to be happy, yes he will when you lose hope to the King of kings. Trust God!

God is not a God of failure. He is powerful and perfect and whatever you desire, craves for, you will receive it/them in the Mighty name of Jesus Christ. Amen. Stay blessed!
at November 18, 2016