The Agony Of A Childless Widow. 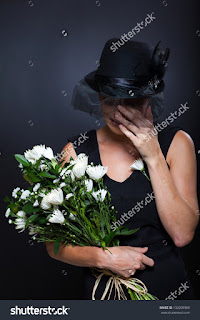 I don’t want to believe that majority of Nigerians are still backward when it comes to understanding the pain a widow goes through after she loses her husband. You might be moved to tears but you can never feel the agony tearing up her soul. The physical, emotional, and mental abuse she goes through is beyond our imagination.

This incident happened in Benin City. Last week Wednesday, very early in the morning, we heard the wailing voice of a neighbor’s daughter screaming and crying. Her words, Uncle why?’ She said repeatedly.

An aunt told me we should go and check what was happening. We stepped outside and saw my step-mom coming through the main gate. She was in tears and informed us one of our neighbors was dead. He died that same day at the hospital. I was shocked because I knew the man to be a jovial, caring and lively person. He should be in his late fifties. If he doesn’t know you and saw you frowning, this man would call and ask what the matter was and he might even give you money if it was the problem. Words ran out of my mouth on how to explain how I felt. I told her and my aunt we should go and see his wife. I thought about her losing her hubby without giving birth for him. We got there and saw sympathizers crying. I couldn’t follow them inside to see the woman, only hearing her voice from where I was pushed me to tears.

One of the widow’s sisters kept saying, ‘who will stay with my sister’

You won’t believe few minutes later, some of her husband’s people came, and ordered those in the living room to stand up and leave. You can imagine the insult! They told their brother's wife to pack her things and never come back. This woman lost her husband few hours ago and they are stopping her from mourning. One of the men rushed inside and came out with different documents. An elderly man presumed to be the elder brother asked where he could buy padlock. No one gave him an answer. He went out and came back with a big padlock he used to lock the gate after everyone came out from the house. The widow said she would have been the one that died so that her husband could give her a benefiting burial. Painful!
The house was renovated two years ago and I must confess everyone in the neighborhood admired the beauty of the building. He didn’t live long to enjoy what he worked hard for. The only good thing is that a woman gave birth to a son for him and his wife is aware of it but none of his family members used that has an excuse for driving her away. The deceased brother said she had to leave the house because she has no child for the man and she was worthless to the family.

On Saturday, one of my brothers called me out that the deceased family members were back and they came with a vehicle of pack some of the properties. This man has not entered the ground, he is still at the mortuary and the next thing his family are doing is taking his valuables. How can people be this wicked? Don’t people have conscience anymore?? Were they waiting for the man to die? He was sick, I heard it was a liver problem and he was flown to India for treatment, got a bit better and came back to die. I don’t want to believe it is a spiritual problem but you can see what is happening.

I don’t want to be biased or tribalistic but this is common among the Bini and Esan people. They would even call her a witch and accuse her of killing her husband. Most of them treats widows like trash! As if they have a disease and are cursed. Losing your husband without giving birth for him can happen to anyone. If this actually happened in America or other foreign countries, would they have treated his legally wedded wife like that? No way! This woman suffered with this man when he had no money. He became rich and still stayed with her despite her childlessness. It’s a good thing he built a house for her before he died. At least she would have a roof over her head but the pain can never disappear except after a very very long time.

Exodus 22:22-23 says, Ye shall not afflict any widow.... If thou afflict them in any way, and they cry at all unto me, I will surely hear their cry." So God blessed those who cared for widows but cursed those who didn't."

Children are gifts from God but in a situation like this, a widow needs the support, love and care she can get. Blaming her for the death of her husband, treating her as if she has a disease or calling her a witch and leaving her alone could lead to depression. Widows don't deserve to be alone.

Zachariah 7: 10 says "Do not oppress the widow, the fatherless, the sojourner, or the poor, and let none of you devise evil against another in your heart.”

I hope she can find peace and I wish her all the best. The wicked can never go unpunished. May his soul rest in perfect peace. Amen!

Do you know anyone going through the same thing or heard of a similar true story?
Kindly share.
at November 22, 2016