I am a lover of cartoon. Are you?

Are you thinking of the one to watch? Check out Zootopia!

Last month, My immediate younger sister sent the movie into my laptop and begged me to watch it. I told her I would but refused. Last week, I was bored and decided to check it out while pressing my phone. I had to drop my phone to concentrate on it because of the storyline. The movie is about a rabbit (female bunny) who fulfills her childhood dream of becoming a cop. She believed anyone could be anything they want! In a world populated by anthropomorphic mammals where predators and prey species peacefully coexisted. Judy Hopps became a cop but was relegated to parking duty by her boss who doubted she was capable of handling cases. On her first day at work, she is hustled by Nick (a con artist), a fox.

Later, Judy abandoned parking duty to arrest a thief named Duke Weaselton who stole plant bulbs. Her boss Boyo reprimands her, but an otter named Mrs. Otterton entered his office pleading for someone to find her husband Emmitt, one of the fourteen predators who had gone missing. When Judy volunteered, Assistant Mayor Dawn Bellwether praised the assignment and thanked her. Boyo gave Judy 2 days to find Otterton on the condition that she must resign if she failed. Let me not tell you the whole story. I can't count how many times I have watched it this week just to laugh and entertain myself. It's interesting, inspiring and funny! 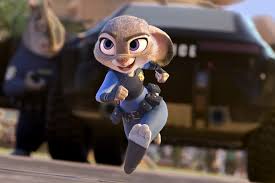 There are so many interesting characters apart from the bunny and the fox who became friends and partners later. Please watch it and thank me. Lol