The Evil Mind of a Serial Killer: Ted Bundy.

Ted Bundy was an intelligent, good looking man and many of his victims did not fear or question him because he did not look like a “monster” and was charismatic. Serial Killers can come in all shapes and sizes: do not be fooled by charisma, charm, and attractiveness.

He was born on November 24, 1946 in Burlington, Vermont and was described as a charming, articulate and intelligent man. These traits allowed Ted Bundy to get close to his victims. Bundy raped and/or murdered scores of women, strangling and mutilating his victims. He displayed their lopped off heads in his apartment. 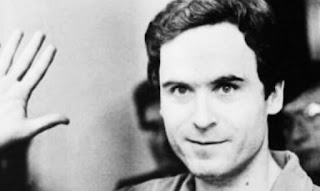 He tended to prey on college campuses first in Washington, then in Utah and Colorado, and finally in Florida. His victims were women who looked much like a young woman who broke off her relationship with him. Bundy was first arrested in Utah but escaped and continued his killing spree. He was stopped for a traffic violation in Florida leading to his final arrest, February 15, 1978.

As if he hadn’t already caused his victims and their families enough pain and suffering, he tried to manipulate them into saving him on top of everything else. Ted Bundy actually tried to convince the families of his victims to faxing letters to Florida Governor Bob Martinez pleading for mercy and reducing his sentence to life in prison. In exchange for helping him dodge the death penalty, Bundy agreed to finally tell them were the remains of their loved ones were. Disgusting. Obviously his little ploy failed and he was sentenced to the electric chair - which pumped him full of about 2,000 volts of electricity on January 24, 1989.At the time of his execution, Bundy had confessed to 30 murders, though the actual number of his victims remains unknown.
Bundy often wore his arm in a sling or in a fake cast or his leg in a fake cast. He would ask his victims to help him carry things to his car or help load or unload things from his car. Once the victims got in his car or were leaning into his car he would strike them over the head with a crowbar or pipe; after hitting his victims, he would handcuff them to immobilize them. He was also known to impersonate authority figures, such as police officers and firefighters.

It wasn’t until an interview in the 1980s that Ted Bundy admitted the full extent of his sexual deviance to authors Stephen Michaud and Hugh Aynesworth. He said after raping and killing women, he liked to spend the night with their corpses. He’d have sex with the bodies and often revisit them for additional sexual assaults until they were too decomposed or the animals got to them. Bundy kept the heads of 12 of his victims - he decapitated them with a hacksaw, washed their hair, applied makeup to them, and engaged in sexual acts with them.

You should know after his arrest, it came to light that Ted Bundy kept one of his victishouldleton hidden in a utility closet by his apartment. But sometimes the photos weren’t enough-  he’d also keep severed heads and random body parts. When asked why he kept such morbid tokens he replied,

“When you work hard to do something right, you don’t want to forget it.”