Recently I watched Narcos series (season one). It is the story of Pablo Escobar, popularly known as the King of Cocaine. I decided to find out more about him. If you don't know anything about him oR haven't heard of the name Pablo, read and thank me later. Lol

1. From humble beginnings to seventh-richest man in the world. Pablo Escobar will forever be known as the Drug Kingpin. Despite being a poor farm boy, Escobar rose to become the leader of the infamous Medellin Cartel – a drug organization that became responsible for supplying 80% of the world’s cocaine. Pablo was born in Rionegro, Colombia in 1949. His mother was a School Teacher and his father was a Farmer. 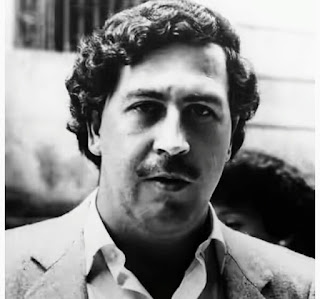 2. On the streets of Medellin, Pablo started his criminal career in his teens. It is said he used to steal tombstones, sandblast the names of them and sell them to smugglers in Panama. Pablo was ambitious from the beginning, and he used to tell his friends that he would be a millionaire by the time he was 22.

3. Pablo started the cocaine trafficking early in 1975, which fast gained notoriety. He had an inescapable policy when it came to dealing with law enforcement. The government referred to it as “PLATA O PLOMO”, which meant, accept money; or face bullets.

4. At the height of his reign Pablo Escobar was making around $420 million each week.

5. His yearly earnings peaked at an estimated $30 billion a year. That including the $1-2 billion in losses a month.

6. From 1987 until 1993, Escobar made the Forbes’ list of international billionaires. In 1989, he ranked as the seventh-richest man in the world.

8. About 10% of Escobar’s earnings were lost to spoilage. It is likely that rats consumed a large bulk of the bills.

9. Escobar is said to have smuggled cocaine into the United States using plane tires. Pending how much they flew, pilots could earn up to $500,000 a day.

10. The demand for cocaine skyrocketed in the 1980s and at its peak, Escobar’s Medellín cartel smuggled 15 tons of cocaine per day to the United States, or about the weight of two African elephants. And he smuggled most of his cocaine straight over the Florida coast, with little problems.

11. Pablo owned a Learjet specifically for his cash. The last thing you didn’t know about Pablo Escobar is that he had an interesting solution to a very rare kind of cash flow problem. Escobar and his cartel began to see soaring profits rather quickly. His being a cash business, Escobar needed to get that U.S. cash back to Colombia. For a while, the small plane he used to transport that cash was sufficient, as it could hold about $10 million.

12. Despite his horrific business dealings, Escobar was celebrated by the poor people of Colombia. He was known to give money to churches, hospitals, establish food programs and built parks and soccer stadiums.

13. He even earned the nickname ‘Robin Hood’ by the poor, even after he was labeled a drug kingpin.

15. Escobar was responsible for the deaths of around 4,000 people. This included 200 judges and over 1,000 police workers, journalists and government officials.

16. Near the small north-western Colombian town of Puerto Triunfo, Escobar purchased 20 square kilometers of land which included Hacienda Napoles. He built there a zoo, a lake and other things for his and his family’s recreation. It is said that this place hosted drug fueled parties where Colombia’s most powerful and most beautiful people gathered. Now this paradise is in ruins with refugees and hippos inhabiting the area.

17. When the Escobar family was in hiding, Pablo’s daughter became sick with pneumonia. In order to keep her warm, Pablo lit $2 million dollars on over the course of a couple of days.

18. It was known that Pablo’s greatest fear was extradition. He said he’d rather “be in a grave in Colombia than a cell in the United States.”

19. The fear was so great, he attempted to change Colombia’s law of extradition by paying the country’s entire debt – an estimated $10 billion. A plan that ultimately failed.

20. In an attempt to appease the Colombian Government and avoid extradition to the US. Pablo built himself a luxury prison and incarcerated himself in it. The prison was known as ‘La Catedral’.

21. He continued his criminal activities from within ‘La Catedral’ and hence the authorities planned to shift him to another cell. Pablo however discovered the plan and made an unhurried escape.

22. Escobar was gunned down at the age of 44, during a rooftop firefight. Some people speculate the wound was self-inflicted.