1. The Burj Khalifa (the most luxurious hotel ever built) is so tall that some of its residents need to wait longer to break fast during Ramadan. Residents from the 150th and higher floors see the sun longer than other residents of the hotel. 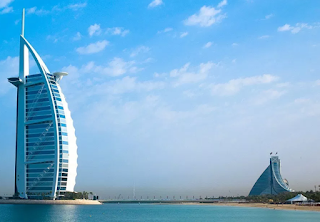 2. Foreign women visiting Dubai who get raped and report the incident are most likely to be jailed instead of the rapist.
Marte Deborah Dalelv from Norway who brought rape charges against her colleague was sentenced to sixteen months in prison.


3. The Burj Arab hotel uses enough gold to cover the Mona Lisa painting 46,265 times.
4. The crime rate in Dubai is as low as 0%. This is the reason why the city is considered one of the safest cities on earth. The law is strict and also, its residents are orderly, law-abiding and full of good morals.

5. 85% of Dubai population are foreigners. Most of who come from India, Pakistan and Bangladesh. They migrate to Dubai in search of a well-paying job.

Residents of Dubai do not pay personal income tax. So they earn a lot of money and save most of it.
6. Dubai is the city of the most rapid changes. Within the past 25 years there has been a tremendous transformation in the city that some countries can not achieve in 100 years.
7.  In Dubai, wild animals are used as pets, and the owners drive alongside with their pets sitting on the passenger seat.
8. 40% of physical gold traded in the world occur in Dubai. In 2013 only, they traded $70 billion of physical gold in Dubai. That’s 2,250 tonnes, all together the weight of more than 354 elephants.
9. There are far more men than women.
10. It's police cars are expensive. To keep up with the crimes,  they drive Lamborghinis, Ferraris and Bentleys. They added a McLaren to their fleet in December 2013 and a Bugatti Veyron in 2014. They use these fast sophisticated cars at work in order to catch over-speeding vehicles that can outrun slow cars.
at May 03, 2019